Thai exports in May continued to contract by -5.8%YOY. Closer look at escalated trade

FLASH
21 June 2019
The value of Thai exports fell by -5.8%YOY in May 2019, after a -2.6%YOY contraction in the previous month. Reported negative growth in May represented a seven-consecutive month decline, with growth plummeting to a 34-months lowest rate. With this regard, overall export figures during the first 5 months of 2019, on average weakened by -4.5%YOY (excluding military arms and weapons shipment to the US in February).

Value of imports marginally shrank by -0.6%YOY. Growth in nearly all product categories weakened, for example, imports of capital goods, raw materials and intermediate products, and consumer goods dropped by -6.1%YOY, -5.0%YOY, and -2.2%YOY, respectively. On the other hand, imports of fuel lubricants grew by 22.8%YOY.

Trade war escalation stoked fear among businesses. Amid temporary trade truce during December 2018 to April 2019, various investors and institutions thought that the end to the US-China trade war was near. However, in early May 2019, the US deemed the US-China negotiations unacceptable and on May 10, 2019, decided to dramatically escalate tariff to 25% from 10% on USD 200 billion worth of Chinese imports. The move renewed market fear, as reflected from indices such as the US Trade Policy Uncertainty Index  that tracked trade policy confidence, which surged to 234.7 in May from 128.9 in April. Furthermore, Thomson Reuters/INSEAD Asian Business Sentiment Index conducted during May 31 to June 14 , revealed that Asian business confidence during quarter 2 of 2019 dropped to 53 points, a 10-years low rate and the lowest rate since the 2008 financial crisis (Figure 1). As such, weakened business confidence and heightened trade policy uncertainty should continue to slow global trade and investment, going forward.

In 2019, Thai export growth could fall below the previously anticipated rate of 0.6%. Thailand and key regional exporters continued to face slow export growth in May, with no signs of recovery present. Furthermore, uncertainties and fears regarding the reemergence of trade war tensions additionally hamper the situation. As a result, global trade and investment could fall below the expected levels. With heightened trade war tensions, Thailand’s export sector will receive both direct and indirect impact. In terms of direct impact, Thai exports to China will drop, especially of products in China’s supply chain targeted for export to the US. Meanwhile, the indirect impact will be from other countries’ dependency on China. As China’s economy slows, economies of countries that depend on China also slow, hence a decline in exports to these markets. According to analysis from EIC, Thai exports to countries with higher dependency on China slowed significantly relative to markets with lower dependency on China (Figure 2). With such regards, export value growth in 2019 could be below the forecasted 0.6% growth, with the probability of negative growth. Currently, EIC is conducting a thorough analysis and will officially release revised figures during early July 2019.

Important events to consider. The first is to monitor US-China trade war tensions that could be further elevated. In early July, the US could impose additional import tariffs on Chinese imports worth USD 300 billion, in which, China would most probably retaliate. Furthermore, the G-20 meeting that will occur in late June 2019, will mark an opportunity for the two leaders to meet, a widely anticipated event. The second event to monitor is the United States’ plan to ramp up automotive import tariffs from all countries to an anticipated 25%. Negotiations for automotive import tariffs with the European Union and Japan are currently in place with expected conclusions within November 2019. 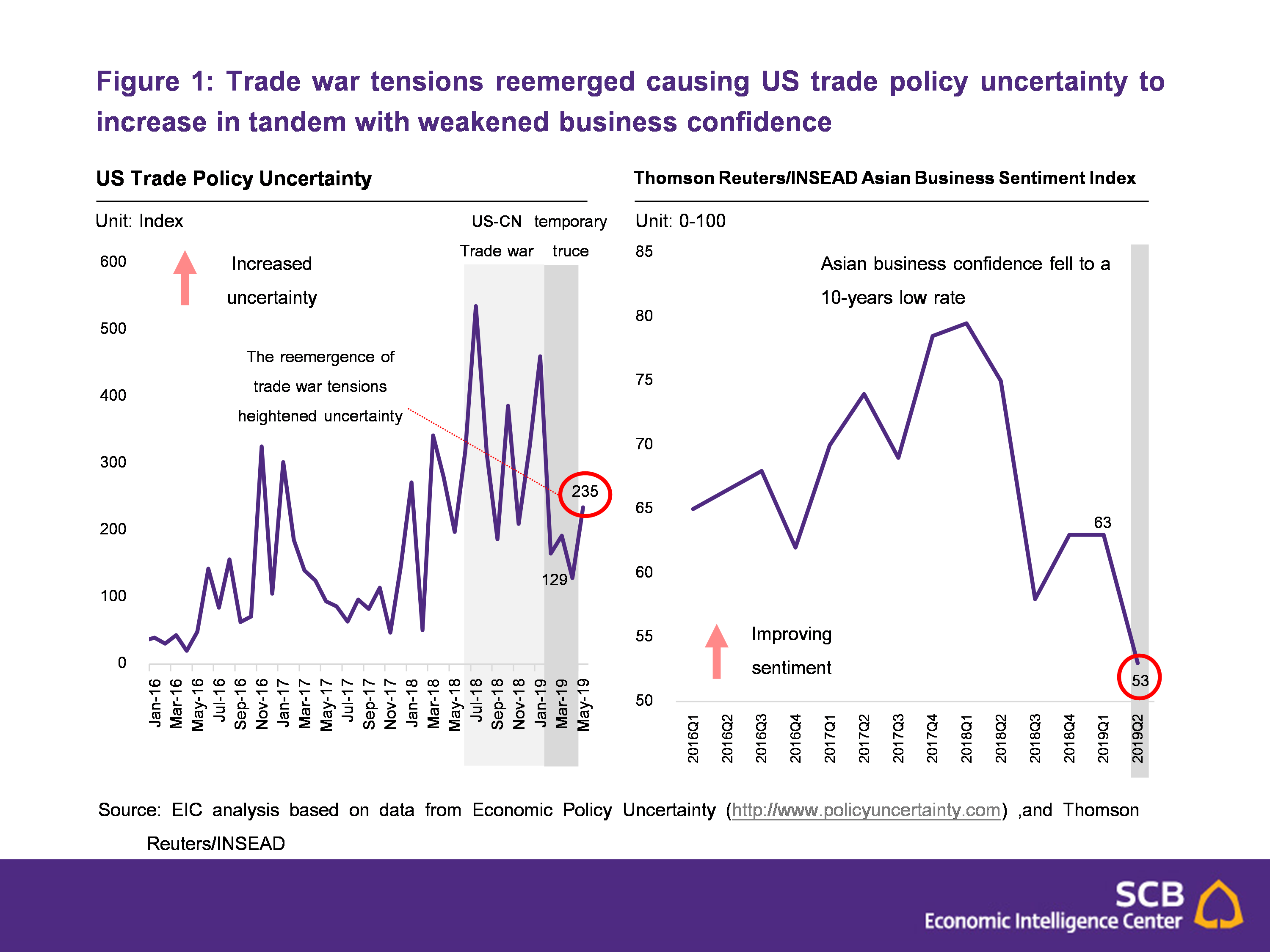 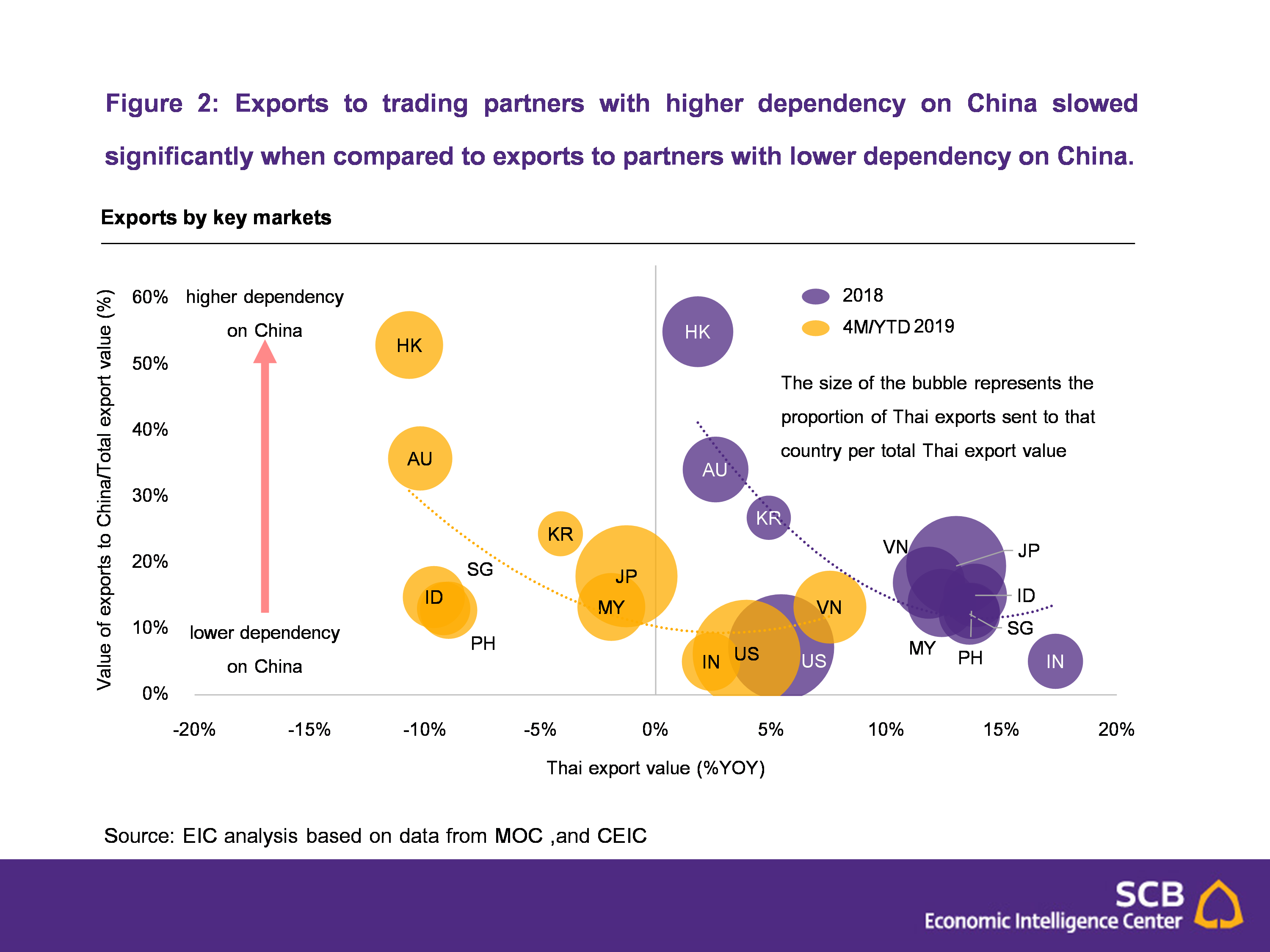