Challenges and opportunities for businesses under the measure to reduce plastic use.

Challenges and opportunities for businesses under the measure to reduce plastic use. To solve the mentioned issue, the Thai government set the goal of banning the use of 7 types of single-use plastic within 2025. The Thai private sector has also already begun to stop using plastic products. On 26 December 2018, the sub-committee on plastic waste management has considered the plan of action on reducing and banning the use of 7 types of single-use plastic between 2019 – 2025. In 2019, it is expected that the use of the following products will be banned 1) Cap seal that is normally made from PVC film 2) Products that consist of OXO, which is usually found in the HDPE and LDPE and 3) Microbead made from plastic. In 2022, the targeted plastic products to be banned include 4) Plastic carrier bags that are thinner than 36 microns that are usually made from LLDPE and 5) Foam food containers. As for 2025, the plastic products being targeted are 6) Single-use plastic cup and 7) Plastic straws. The majority of Foam container, cups, and some plastic straws are made from Polystyrene.

Through the measure of banning the use of 7 types of plastic, LLDPE will be the most affected product. This because it is used in the making of carrier bags and packaging film that account for over 55% of the total use of LLDPE to make plastic products.


Figure 1: Plastic used for packaging, impacts from Thailand’s measure, and the limitations of recycling.

Source: EIC analysis based on data from the pollution control department and PTTGC.

In addition, LLDPE is known to be difficult to incorporate into the waste management system. This is because LLDPE is a type of plastic that is very flexible which makes it difficult to destroy since it can become trapped in the wheels and gears of machines that are used to sort bottles, cans, and paper in the waste management facility. Furthermore, it is difficult for LLDPE to be re-material since the packaging will be stamped with the brand logo and product information. Through Thailand’s policy of reducing and banning the use of plastic, as well as similar measures imposed abroad such as in the EU, China, and Australia, it is expected that the demand for LLDPE will reduce from the growth of 5% per year between 2010-2017 to only 1% per year.

Figure 2: Global demand for LLDPE is likely to slow down due to the changing trend on plastic use. 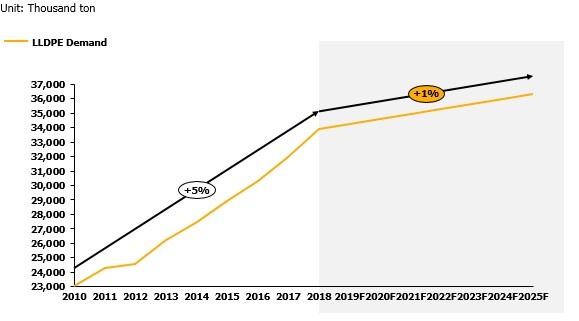 Source: EIC analysis based on data from Wood Mackenzie and ICIS.


Additionally, the costs of production for businesses in the plastic moulding and packaging industries are likely to increase. This is because they will have to find new raw materials to replace the banned plastic. Meanwhile, the new raw materials must be able to retain the properties of old materials while also being friendly to the environment. Subsequently, the costs are like to be higher. As an example, the costs of producing degradable plastic straws will are twice as much as the traditional alternative. Other than the raw material costs, producers may also have to invest in R&D to develop a material that is suitable for the product or packaging that is being produced, as well as investing in marketing communications to publicise the special properties, especially the environmental dimension, of their products.

Nevertheless, the banning of single-use plastic can also create opportunities for businesses who possess the capability to recycle PET plastic. PET is a type of plastic that can be re-materials. For example, PET plastic water bottles can be depolymerised to create monomer that can then be processed into polymer to create plastic. The process is known as repolymerisation. This process means that plastic water bottles can be processed into new products at least 100 times. Therefore, the above process or the re-use of plastic water bottle create opportunities for PET producers and PET recycler. This is evident in the case of Loop Industry, Inc., a business registered in the US, who is specialised in the recycling of PET with their own innovation in making polyester resin plastic that is pure enough to create food packaging products. It is worth noting that Indorama Ventures PLC., a major plastic producer on the global stage, has entered into a joint venture with Loop Industry, Inc. in the US through its subsidiary to create Indorama Loop Technologies, LLC. with the aim of using such a technology to create packaging for global consumer goods brand in the first quarter of 2020.

EIC views that businesses should prepare for the changes in plastic use by producing plastic that is environmentally friendly, such as bioplastic, and to enter the product packaging industry by using materials other than plastic. At this stage,  there is only one type of plastic that can be re-material that is PET. Other types of plastic cannot be re-used with the same quality as PET. Therefore, petrochemical producers are faced with the impact of the recent trend on avoiding the use of plastic and the measure to ban plastic use. This creates a sizeable challenge in finding new raw materials to replace plastic. For example, bioplastic can be made from sugar cane and casava. Furthermore, businesses in the plastic moulding industry to create product packaging need to be ready to face the increasing costs of production of at least twice as much from the change to new packaging that is environmentally friendly. It is worth noting though that the increasing costs can be passed on to the consumers in some instances, such as restaurant that use straws, plastic food packaging, or retailers using plastic bags who must also face the increasing costs of new materials. Nevertheless, the new measure introduced on plastic can create opportunities for producers of non-plastic packaging, including paper and rice, to be able to enter the food packaging market such as a paper bag for carrying sugar, straws that are made from rice or paper, to name a few.

Note_ENG_Paper-of-plastic_20190418.pdf 288.40 KB
Tags
ThailandBioplasticPlasticSingle-use plastic
We use cookies and other similar technologies on our website to enhance your browsing experience. For more information, please visit our Cookies Notice.
Accept