The Rise of Cryptocurrencies: Massive Opportunity or Speculative Hype? Cryptocurrencies are a form of a digital money created on computer systems. Their dominant feature is that there are no third-parties or middlemen controlling the currency, unlike traditional fiat currencies. The developers of each cryptocurrency can design their own systems, starting from how to acquire the money, how much money will circulate in the system, and how to use it. Each cryptocurrency is based on decentralized and distributed tracking of currency movements, making all transactions visible to anyone in the network, which in turn enhances the security and transparency of data.

Of all the cryptocurrencies, Bitcoin is the first to have been invented. With the Bitcoin market heating up over 600% since the beginning of 2017, people around the world have their eyes on Bitcoin’s phenomenal growth. This growth is driven primarily by rising demand, both from people who are starting to awaken to the use of cryptocurrencies, and from investors looking to profit from trades. Bitcoin has outperformed traditional currencies in many respects, such as enabling faster remittances. Since Bitcoin does not require intermediaries to confirm transactions, payments made via Bitcoin can be completed within ten minutes or so. Bitcoin is also very secure. With everyone in the Bitcoin network working from real-time transactional data and the same database, it is difficult to modify transaction data or an attack on the system to occur.

The popularity of Bitcoin has resulted in over a thousand other newly-invented cryptocurrencies. Each of these new currencies contain enhancements offering a variety of features and facilitating more real-life applications. For example, Ether applies smart contracts so that transaction conditions can be specified. Merchants can opt to process payments on the condition that the goods have been marked as delivered. Insurance claims can be automatically filed when a plane is delayed, saving passengers the trouble of filing such claims later. Another cryptocurrency, Ripple, has been designed as a remittance currency, enabling safer remittances within just seconds. These two cryptocurrencies are currently getting increased attention from investors and financial institutions because they provide obvious benefits that can be applied in a variety of scenarios. As a result, their price has risen more than 3,000% since the beginning of 2017. Both currencies together are now worth more than 20% of the cryptocurrency market, with Bitcoin accounting for more than half of the market, and the rest of the market share being belonging to other cryptocurrencies.

The view of the government and central banks in each country is also an important challenge to confidence in cryptocurrencies. At present, there are still very few countries that recognize cryptocurrencies as official currencies and allow them to be used formally. One such country is Japan, which has legalized Bitcoin as a legitimate form of payment and has also issued business licenses to those who operate cryptocurrency exchanges. However, most countries around the world have not yet issued formal regulations since they view cryptocurrencies as digital assets that have no intrinsic value. Moreover, some countries are moving in the opposite direction and sending out negative signals, such as the Chinese government's ban on initial coin offerings (ICOs) and ordering the shutdown of cryptocurrency exchanges.

Thai regulatory authorities have not yet issued official statements controlling the use of cryptocurrencies. However, they have shown a positive outlook towards the development of FinTech and financial innovations. Currently, Thai banks have not yet authorized the use of cryptocurrencies as legal payment schemes. They have also issued warnings about the risks involved in holding cryptocurrencies. Yet Thai regulatory authorities continue to pay close attention to related technologies, such as Blockchain, which provide additional data transparency. Over the past few years, Thai regulators have shown very positive views toward FinTech, issuing regulations to support financial innovation and even creating regulatory sandboxes to enable entrepreneurs to test out new financial products prior to legalization. Such measures have influenced the business sector to invest in these studies and develop services using these technologies.

Figure 1: The value of cryptocurrencies has skyrocketed

Units: Billions of US dollars, Index

Source: EIC analysis based on data from Coinmarketcap and Coindesk

Unit: Billions of US Dollars 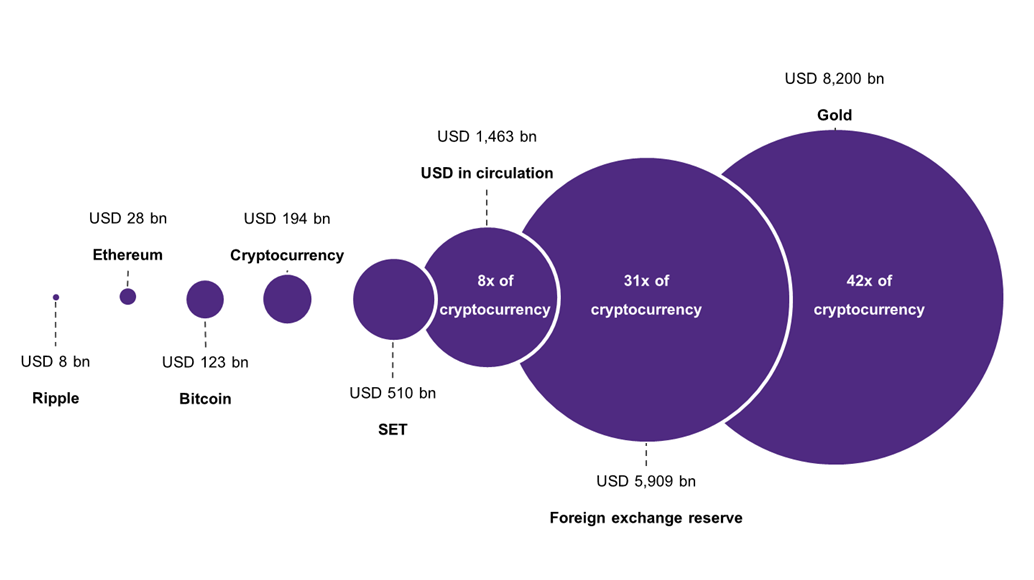 Source: EIC analysis based on data from Coinmarketcap, SET, the Federal reserve, the IMF, and Business Insider

Source: EIC analysis based on data from Coinmarketcap, Coindesk and Bloomberg

Note_EN_Cryptocurrency_20181115.pdf 319.55 KB
Tags
JapanChinaCryptocurrencyBitcoinBlockchain
We use cookies and other similar technologies on our website to enhance your browsing experience. For more information, please visit our Cookies Notice.
Accept