Large-scale and sophisticated mixed-use development projects in big cities, such as Singapore’s Marina Bay Sands, are becoming a hot trend in Thailand. Mixed-use projects e.g. One Bangkok and ICON SIAM are a new type of property development in Thailand that comprising an ecosystem of housing, office, and shopping space. Furthermore, these projects are unique in design and can become new landmarks of Thailand. 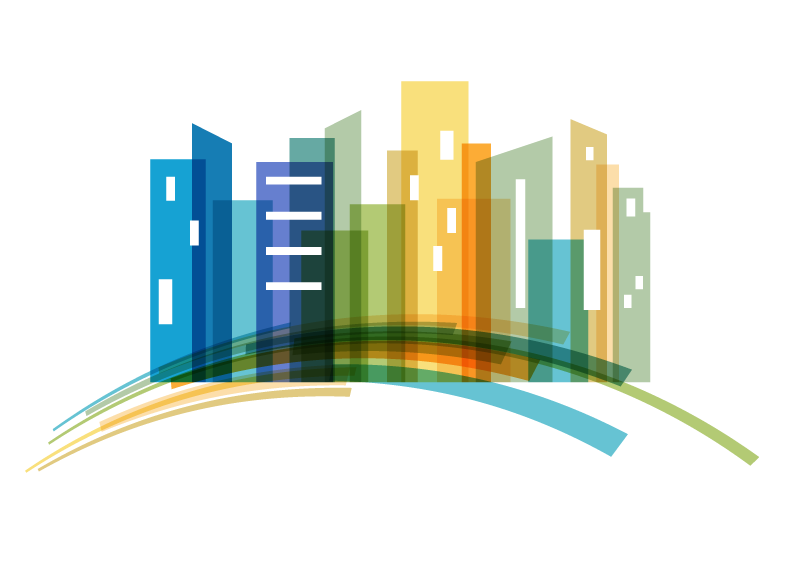 High returns on investment will prompt developers to consider large-scale mixed-use projects as an alternative investment choice. Mixed-use projects are more effective in responding to developers’ needs than their single-use counterparts since they are less risky, have a greater variety of revenue sources, and can raise the capacity of expensive land plots by integrated components. This type of development will enable owners to enjoy a continual income stream from property sales and rentals as well as increase the project’s value. As such, the ROI of mixed-use projects exceeds single-use projects by up to 1.5 times1. Nevertheless, there are many challenges posed to these projects, such as financial management, finding large and suitable development sites, and striking the right balance between residential and commercial components.

Prominent design and synergistic integrated components are part of success factors of large-scale mixed-use projects as this will differentiate the project and enable it to become a new landmark for Thailand. Marina Bay Sands, launched in 2010, is worth around USD 5.5 billion, and has become a symbol and new landmark for Singapore due to its unique design and integration of over 6 different functions. Thus, the project’s financial performance has exceeded the market’s average. The hotel component has a RevPAR2 that is 10% greater than the market’s average. As a tourist magnet, the project has been beneficial to country’s economy as the growth of tourist arrivals after the launch of Marina Bay Sands between 2010-2013 increased to 10% per year, from a rate of 4% per year during the three years prior to its launch.

Developers in Thailand will likely seek business partnerships to develop large, more complex, and more valuable mixed-use projects. As the modern urban population requires greater convenience in their daily routines, work, and shopping amid a limited supply good potential property, large-scale mixed-use project developments will become increasingly popular. As these projects require expertise in multiple areas businesses will need to collaborate to develop projects that are more sophisticated and able to respond to the needs in each location. Mixed-use concepts are already seen among projects that were completed in 2016, of which most were projects integrating basic property functions such as condominiums, hotels, and shopping malls worth on average around THB 12 billion per project. However, mixed-use projects that will launch by 2025 will have investment value up to THB 120 billion per project and will integrate new components such as museums, conference centers and exhibition halls (Figure 1) similar to the One Bangkok project.

The growth in mixed-use projects will raise competition within the property market as they can better meet the needs of consumers. Large-scale mixed-use projects that are currently close to completion will increase retail commercial and office space by 550 thousand square meters and 660 thousand square meters by 2025, as well as increase the supply of high end hotels and condominiums. This in turn will affect single-use property developments in nearby areas because mixed-use projects will be able to improve the quality of for consumers.  For example, by combining office space and residential areas office workers can choose to stay in the same area as their workplace so to save traveling time (Figure 2). The success of mixed-use projects is reflected in an office space occupancy rate that is as high as 97%, whilst occupancy rates for conventional offices in 2016 averaged around 92%. Furthermore, office rental rates of mixed-use projects are up to 20% higher than ordinary offices.

EIC sees rental office space in the CBD area likely being most affected by large-scale mixed-use projects. Although the amount of office space will rise to 8.8 million square meters by 2017 and office space occupancy rates in Bangkok will remain above 90%, the increase in the supply of office space from large mixed-use projects will in part hurt conventional rental office businesses, reducing their occupancy down to a rate of 80% by 2025 (Figure 3). This is because office space leasers are more likely to move into mixed-use property as they are more functional and modern. Therefore, businesses leasing office space should adjust by modernizing their buildings and adding facilities such as convenience stores on ground floors or nearby areas, improving indoor facilities such installing faster lifts, as well as building closer relationships with tenants in order to maintain current customers.

1 returns on investment based on calculations from Solimar research group
2 RevPAR (Revenue Per Available Room) is a performance metric used in the hotel industry and is calculated by multiplying a hotel's average daily room rate by its occupancy rate.

Figure 1: Large mixed-use projects have higher valuation and are becoming increasingly complex due to greater integration of various property functions. 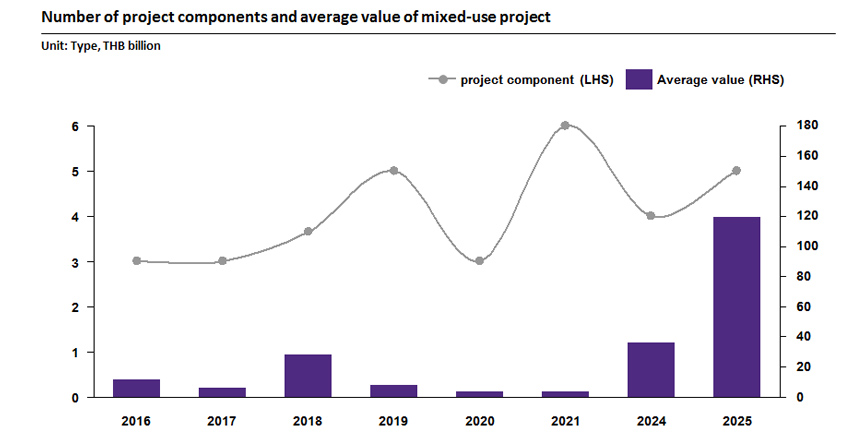 
Figure 2: Consumers will benefit from mixed-use projects that integrate property uses that are complimentary, such as office and residential space. 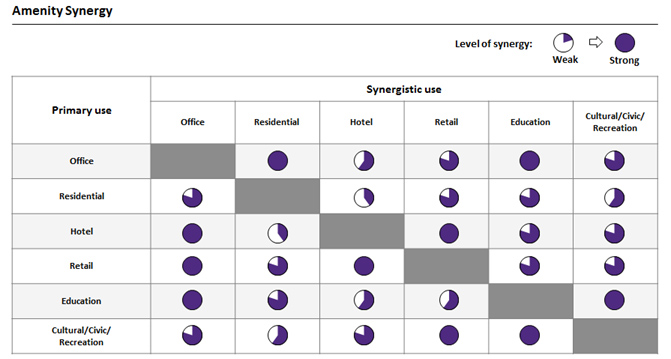 Source: EIC analysis based on data from Adelaide City Council

Figure 3: Increase in office rental space from large mixed-use projects will in part cause occupancy of ordinary office space to decrease to a rate of 80% by 2025. 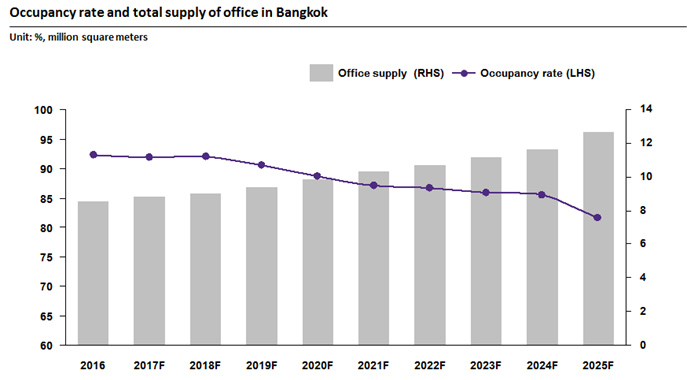 Source: EIC analysis based on data from CBRE

Note_-EN_Mixed-use_20171010.pdf 325.03 KB
Tags
ThailandReal Estate
We use cookies and other similar technologies on our website to enhance your browsing experience. For more information, please visit our Cookies Notice.
Accept