HDD industry: a choice to stay or walk away?

The Thai HDD industry is likely to grow as a large HDD manufacturers recently expanded production. Thailand is ranked the second largest Hard Disk Drive (HDD) producer in the world after China, with large manufacturers like Western Digital (WDC) and Seagate Technology (Seagate), along with part producers such as Nidec, Minebea, and TDK. WDC cut back production in Malaysia and expanded in Thailand’s Prachinburi province while Seagate terminated factories in China and Malaysia and increased investment in their production base in Nakornratchasima province in Thailand. These events should raise Thai HDD exports by at least 15%

However, SSD is replacing HDD usage. HDD shipments dropped 8% CAGR during 2013-2016 while shipments of Solid State Drives (SSD) surged around 37% CAGR. More importantly, annual global demand for HDD declined from 420-480 million units to only 300 million units. The switch to SSD is because the NAND flash memory in SSD is superior to the disk technology employed by HDD in various dimensions, including access speed, stability, and durability. Moreover, new memory storage technology in SSD known as 3D NAND now allows larger storage capacity and is no longer inferior to HDD as was the case in the past. Production costs for larger storage s have declined comparison to HDD

SSD replacement for HDD could happen when there is no difference in cost per gigabyte (GB) between the two technologies. Indeed, the difference could still exist but at a smaller price difference because the choice between HDD and SSD does not only concern cost per GB. Consumers must consider indirect costs such as maintenance and electricity expenses as well and SSD beats HDD on those parameters. However, HDD now holds an edge on cost per GB as HDD prices are 4 times lower than SSD in the 500GB model range (1,430 baht for HDD versus 5,790 baht for SSD)*. In fact, SSD’s cost per GB recently picked up and widened the difference with HDD due to a shortage of NAND flash, an important part of SSDs. The shortage was due to both a fall in supply and higher demand. Supplies dropped because the industry is currently transitioning from 2D NAND to 3D NAND. On the other hand, the surge in demand for NAND comes not only from SSD producers, but also from smartphone and tablet producers. According to JPMorgan, around 8,542 million NAND is to be used to make smartphones and tablets in 2017, up 56% from 2016. The use of NAND in SSD totals 7,795 millions this year, up 46% from 2016.

In addition, the Big data boom is seeing HDD usage grow in data center business. Despite the wide usage of SSD in personal computers and hyper-scale data centers such as Amazon, the booming big data trend makes data and information a key success factor in business and points to higher demand for data storage. According to a report by Cisco, data in data centers in 2020 will exceed 2016 levels by 3.6 times and use HDD to store less frequently used, such as backup data, to save costs. At the same time, high-potential yet expensive SSD is used in data storage system where performance is needed to support fast data processing and access.

Thai producers in the HDD supply chain therefore have opportunities in this industry, but should adapt themselves to changes in the market. HDD businesses include producers of HDD and parts as well as logistics operators. As large HDD producers invest more in Thailand, they are less likely to move their production  abroad.The HDD industry in Thailand should continue to grow along with improved prospects for HDD usage in data centers. Despite a continuous decline in HDD shipments, the number of parts required to make them may not necessarily fall. Players in the market have switched to focus on making HDD for data centers which require very high storage capacity. As a result, more parts are needed for assemblies. For example, more disks are required to accommodate larger data storage. However, businesses should look to start relying less on the HDD market. There is room for adjustment to cope with the changing market as the replacement of HDD by SSD will take time.

Note –Remark: price as of 20 July 2017 according to Advice Holdings Group 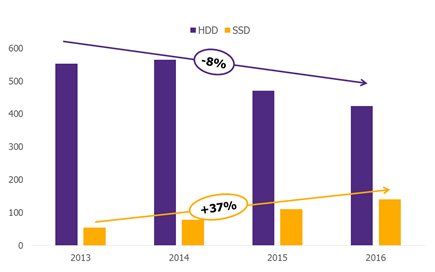 Source: EIC analysis based on data from JPMorgan

Figure 2: Cost per gigabyte of HDD and SSD
Unit: $/gigabyte

Source: EIC analysis based on data from GS

Note_EN_HDD_20170726.pdf 208.90 KB
Tags
ThailandHDDSDD
We use cookies and other similar technologies on our website to enhance your browsing experience. For more information, please visit our Cookies Notice.
Accept