New wave of business opportunities in the EEC 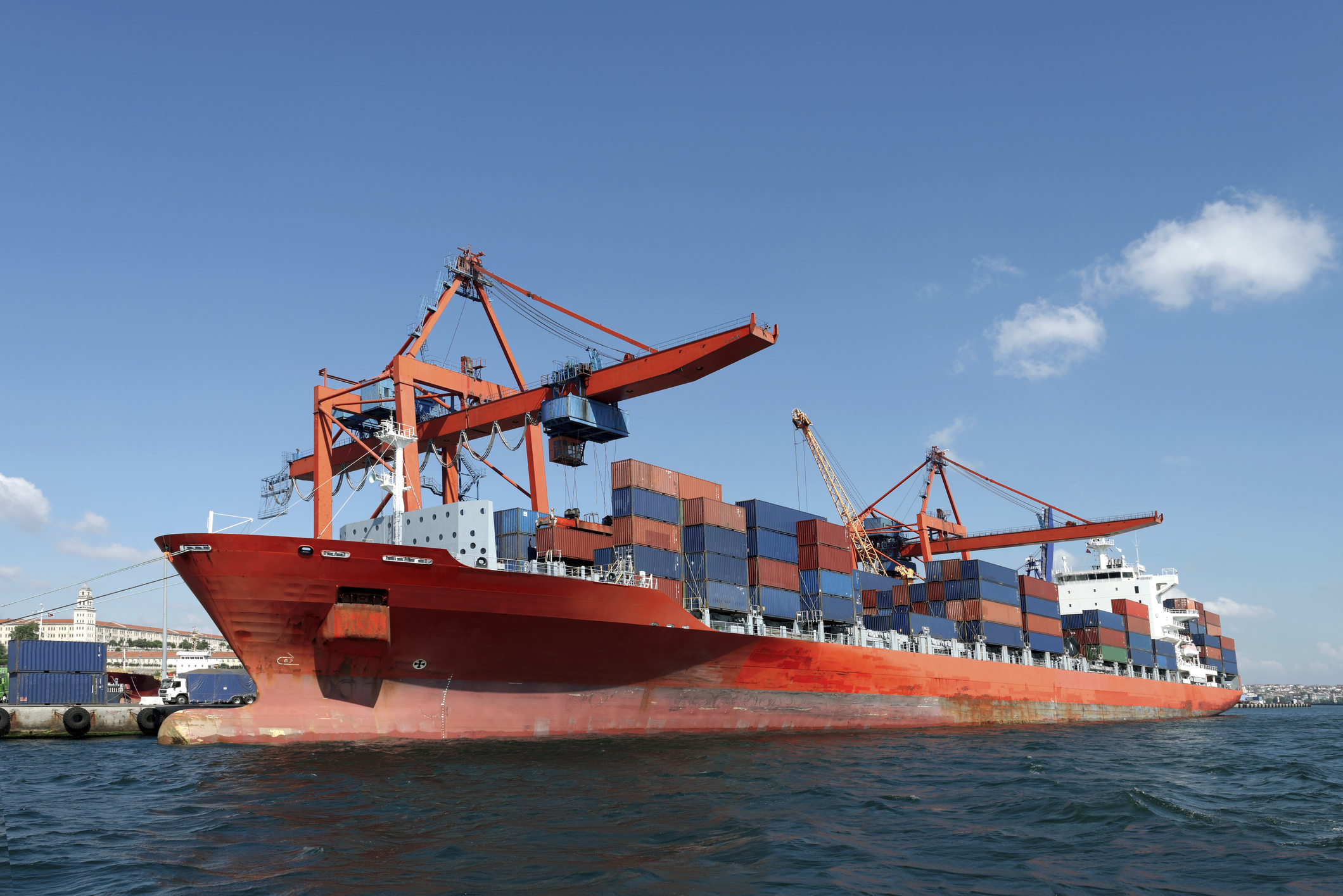 Thanks to the region's existing strength in industry and its location, the government is positioning the EEC as the main engine of growth for Thai industry going forward. Three provinces have been chosen to pilot the EEC: Rayong, Chonburi, and Chachoengsao, with plans to build on their current strength as a major hub for technology-based manufacturing, such as cars, electronics, and petrochemicals. Strategically located, the area has high potential and will be able to draw investments in other industries as well. In the long run, the government hopes that the EEC will lead to sustainable growth for the Thai economy.

Development of transport infrastructure and investment incentives are key to the government's plan to attract investments in the 10 targeted industries. Transport is at the heart of the business. For this reason, the government has plans to develop full-scale transport infrastructure to boost efficiency in passenger and goods transport. The modes of transport covered include land: a double-track railway route covering Chachoengsao-Khlong 19-Kaeng Khoi, the Bangkok-Rayong high-speed rail link, and the Pattaya-Map Ta Phut motorway; air: U-Tapao Airport; and water: Laem Chabang, Map Ta Phut, and Sattahip commercial ports. When completed, these infrastructure projects will greatly enhance sea exports and domestic transport, particularly the distribution of goods from eastern Thailand to the northeastern provinces by rail.

The government is also planning to roll out better tax incentives compared to neighboring countries (Figure 1) and other measures including one-stop service for the approval and issuance of permits, the establishment of a tax-free zone, and work permits and visas for international experts. Still, a World Economic Forum survey shows that other factors affecting investor decisions that the government can work on include assurances of policy stability, innovation capacity, and development of skilled labor

The 5 New S-Curve industries targeted for turbo-charging the Thai economic growth include Automation and Robotics (3 businesses), Aviation and logistics (8 businesses), Bio chemicals and eco-friendly petrochemical (7 businesses), Digital (11 businesses), and Medical hub (6 businesses). The New S-Curve group will push forward with advanced technology and innovation, lifting Thailand's competitiveness in the long run. Sixty percent of businesses in this group are eligible for premium incentives (A1 and A2) from the BOI, particularly the digital and aviation industries (Figure 2)

Aircraft Maintenance, Repair, and Overhaul (MRO): Demand for MRO is likely to rise due to the continuing growth of visitors to Thailand, further spurring investors' interest in the industry. Thailand saw a 13% increase in the number of tourists over the past five years, reaching 32.6 million in 2016. The construction of a new terminal at U-Tapao airport is expected to boost passenger capacity to 3 million per year, from 700,000 currently, with the number of flights expected to grow four-fold to 18,000 flights per year. Thailand is well-positioned to be an MRO hub, with the availability of trained personnel for A check (general) - D check (all aircraft parts). For these reasons Airbus has signed a MoU with Thai Airways to look into the possibility of constructing an MRO facility at U-Tapao.

Environmental-friendly polymer production: With more awareness of environmental issues, consumers are now turning toward biodegradable plastic, especially in Asia, where consumers are expected to use up to 5.2 million tons of biodegradable plastic in 2018, up from 0.3 million tons in 2010, a 43% accumulated growth. Thanks to eastern Thailand's role as a base for the petrochemical industry and the government's “Bio-economy” policy, supporting bio-tech processing of agricultural products such as sugar cane and tapioca, this industry should grow comfortably.

Data centers: With demand for data storage expected to rise further due to increasing mobile phone data usage and connectivity between digital technology and manufacturing, the EEC is well-suited to become a data center. Data transmitted via mobile devices is expected to expand from 360 petabytes in 2015 to 2,700 petabytes in 2020, a 7.5-fold increase. In the future, transmission of an enormous amount of data between manufacturing equipment under the Industry 4.0 concept will also require more data storage capacity. The EEC area is already connected to a fiber optic network, with a landing station in Si Racha district, Chonburi province, facilitating connectivity between both domestic and international networks.

In the first 5 years, THB 1.5 trillion is expected to be poured into the EEC, from both public and private funds, benefiting construction and construction material businesses, industrial estates, and tourism. In the first phase, investment in transport infrastructure worth more than THB 500 billion and in construction of new cities worth THB 400 billion will benefit contractors, as well as producers of construction materials such as cement and steel. After completion of transport infrastructure, the transport of goods will become faster and more convenient, particularly through rail, linking industrial estates and sea ports. Coupled with government incentives, investment in targeted industries is expected to reach around THB 500 billion, providing a boon to industrial estate businesses with land spanning approximately 15,000 rai in the area. Real estate businesses and construction of retail and wholesale stores will also benefit thanks to an uptick in population.

As for tourism, the development of a new terminal at U-Tapao airport, a high-speed rail system linking 3 airports, and a commercial port at Sattahip linking Pattaya, Hua Hin, and Bangkok will all help attract more tourists to the EEC area, presenting service providers, such as hotels and restaurants, with great opportunities. The EEC development plan is poised to boost various industries and drive up Thailand's competitiveness in the future.

Note: 1 Number of businesses indicates businesses targeted by the government, not including support businesses

Figure 1: Thailand's tax incentives are better than those of neighboring countries such as Vietnam, Malaysia, Indonesia, and the Philippines 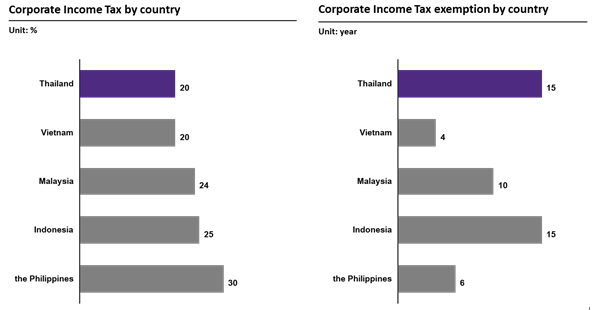 Source: EIC analysis based on data from PWC and KPMG

Figure 2: Around 60% of New S-Curve businesses receive premium investment incentives (A1 and A2), particularly in the digital and aviation industries 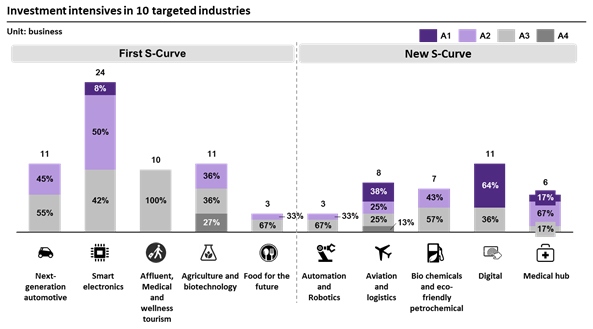 Source: EIC analysis based on data from BOI