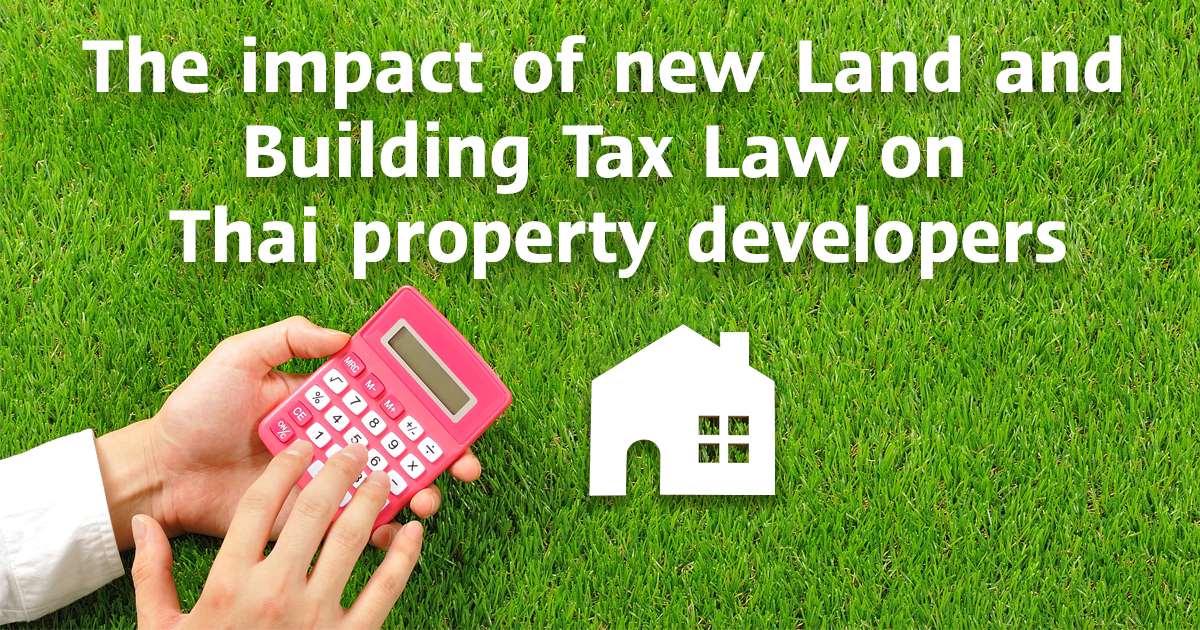 The Land and Building Tax Law will introduce two major changes to tax calculations, which are 1) A shift to a cost approach assessment and 2) Levying tax based on land use. Firstly, tax calculation using the cost approach under the new law is a transition from the previous income approach that heavily depended on officers’ assessment views.  Under the new scheme, tax determination is based on the appraised value of the property, calculated from the sum of standard land and building prices set by the Treasury Department. This approach separates the valuation of land and buildings, whereby the price of the latter varies with the type of construction. The renewal of both land and building costs are adjusted at four year intervals. Secondly, land use categories will be considered under the new tax module. Previously, tax rates were considered based on the annually appraised value of the asset. However, under the new tax law the same building may be imposed with different tax rates depending on the functions it serves. A two-story building used as a store on the ground floor and as a residential area on its upper level, will be levied with a commercial and residential tax rate per the share of area each occupies. Land use purposes are defined into four categories: 1) Agriculture, 2) Residential, 3) Commercial and industrial, and 4) Un-utilized land (Figure 1). In sum, these adjustments to calculations will help standardize tax assessment procedures, whilst separate tax treatment for the different land use purposes will enhance the clarity and fairness of tax measures for both property owners and government. Nevertheless, the transition will impact property developers differently. The varying effects on developers renting property as opposed to those selling property will be discussed here.

The developers involved in selling property will likely bear higher tax burdens on property under construction and unsold completed units. The old Local Maintenance Tax Law have levied a low tax rate based on median prices of land  on property under development or unsold units. The old model would apply a ceiling tax rate of 70 baht per rai on land valued below 30,000 baht per rai. However, under the new tax law the same property will be subject to a commercial tax rate of 2% of the asset valuation. This is regardless of whether the development project is for housing, for which the tax ceiling rate is 0.5%. Nevertheless, while land is under construction tax rates will be discounted down to 0.05% for the first 3 years (Figure 2), implying that a property on land valued below 30,000 baht per rai will be levied a tax rate of only 15 baht per rai. Thus, the new tax law will likely have a small impact on the cost of property development, with the tax reduction period allowing enough time for project completion. Furthermore, even though details of the appraisal methodology of land under construction have yet to be released, it is expected that taxes will be levied based on areas with completed construction at the end of each tax period. Hence, EIC views the overall impact on property under development to be minimal.

Tax on unsold property units, however, will directly raise the cost of projects. A property on sale that has a land and building valuation below 20 million baht on a plot of land the size of 1 rai valued below 30,000 baht would be imposed a ceiling tax rate of 70 baht under the old tax regime. The new tax law, however, would raise tax expenses on the same property by 30%. Also, horizontal housing that is equivalent in size will use the same standard price irrespective of their market value, thus making high-end housing market better off than lower tier developments in terms of tax benefits. Condominiums on the other hand would suffer more severely from the change in tax law compared to horizontal houses as the former’s tax assessments would be based on market prices. EIC therefore sees the rising costs of maintaining condominium units before their sale will have a significant effect on condominium developers. Nevertheless, the property developers still have time to sell off completed units before the new law comes into effect on January 1st, 2019, whereby the outstanding stock of unsold units in Bangkok and metropolitan areas totaled 184,000 units at the end of 2016.

The developers renting out property will benefit from a 20% tax reduction. For example, a property in the Sathorn area that generates 645 million baht in rent revenue annually would be appraised at 1,150 million baht and levied a commercial tax rate of 1.2% under the new law, which would mean a 20% decrease in tax costs compared to the older tax method. Currently the excess tax cost is already being managed through contractual agreements by separating lease agreement into two parts; a lease agreement and a service agreement. This will allow developers to take advantage of the lower tax rate, whereby the property tax on rent revenue and value added tax on services are 12.5% and 7%, respectively. As a result of the change from tax assessment based on asset valuation future developers will no longer need to manage their tax burden via service agreements.

Nevertheless, in cases where leased property has low rental rate but high property valuation, the cost approach tax assessment will raise tax burdens for leasers. This applies particularly to business owners or developers that sublet government sector or state owned enterprise land in prime central areas. The change in assessment method will raise tax burdens for sub-lessors as the property valuation increases to better reflect land potential.  As a result, sub-lessors are likely to pass on their tax burden to tenants by raising rental rate in order to maintain profit margins. EIC feels that tenants of both residential and commercial properties will likely have to shoulder higher rental rate that have been raised to compensate for increasing tax burdens under the new tax scheme, however, most lease agreements specify the party responsible for tax payment.

Additional costs from taxes levied on common areas of leased property is another factor that will raise rent costs going forward. The common areas of rented property will add to tax expenses because their valuation, which were previously excluded from calculations, will be considered under the new law. Since such costs are likely to be passed on to tenants, it can be expected that rental rate will increase in the future, particularly those properties currently charging rental rate lower than the value of the property’s potential. However, as demonstrated by the case of a Sathorn property mentioned earlier, changes to rental rate may be slight as the overall tax burden to the lessor is likely to fall. Nevertheless, all parties should study the involved details in renting property carefully before entering into lease contracts in order to avoid unnecessary tax expense going forward.

Source: EIC analysis based on data from the Ministry of Finance (last updated March 21st, 2017)

Figure 2: Example of tax exemptions and reductions related to the new Land and Building Tax Act 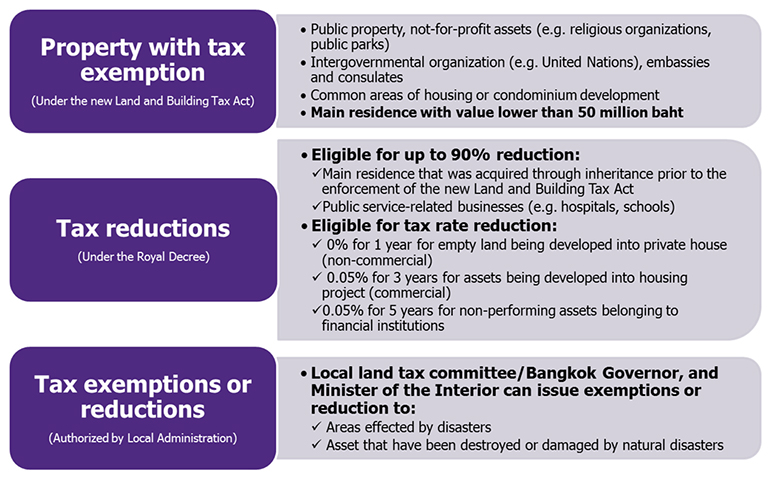 Source: EIC analysis based on data from the Ministry of Finance (last updated March 21st, 2017)