Key political events in Europe throughout 2017 pose significant risks not only to economic recovery in the region, but also to the very existence of the European Union. 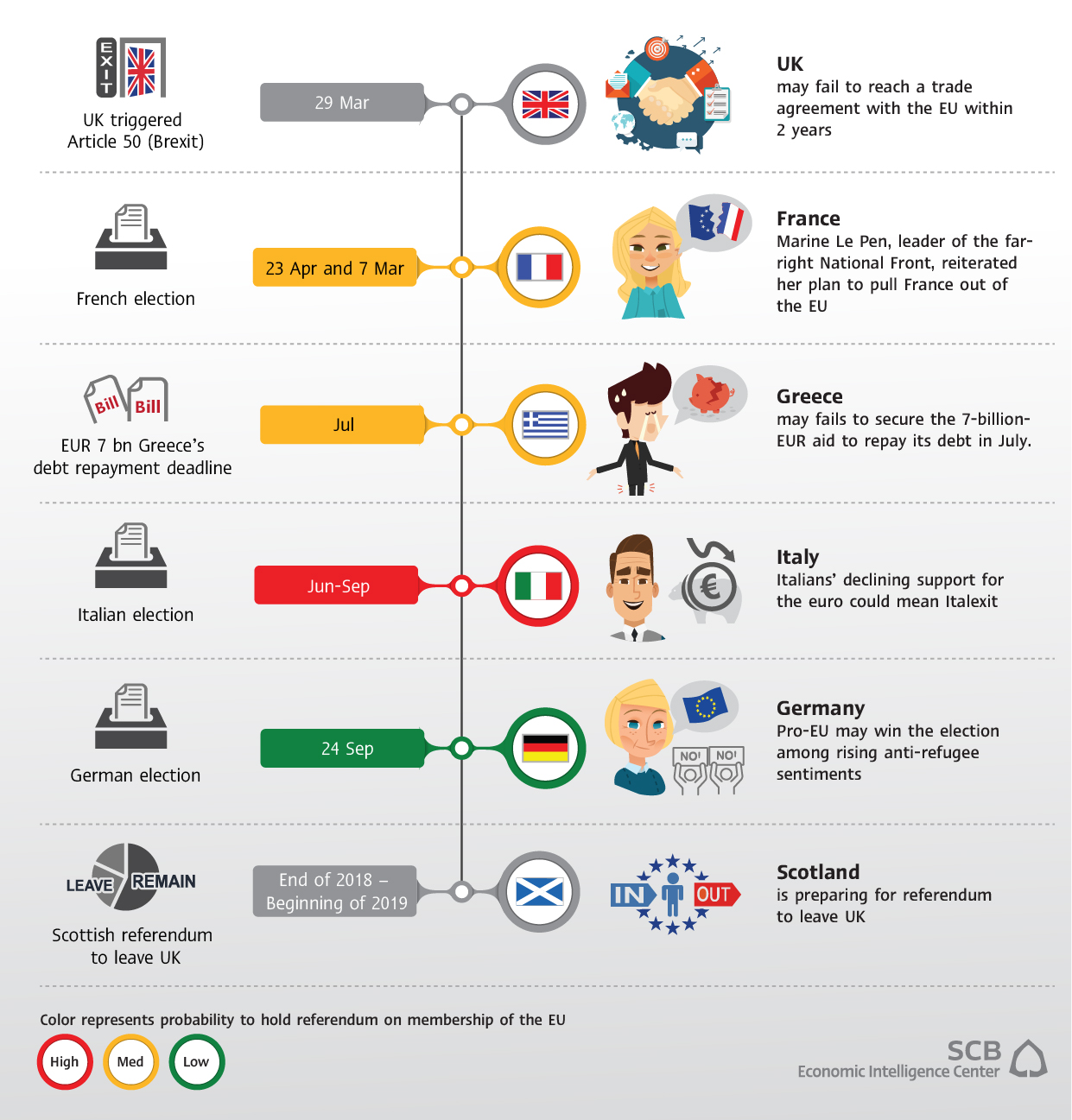 Key political events in Europe throughout 2017 pose significant risks not only to economic recovery in the region, but also to the very existence of the European Union. While the global economy has shown signs of recovery, political uncertainty in Europe now tops the list of potential disruption to investor and consumer confidence. Inevitably, this risk event will affect the Thai economy through global financial markets, fund flows, and Thai exports. The results of these elections will also reflect whether the European citizens still support political and economic integration in the form of the European Union. Economic inequality across Europe, which is partly a result of the introduction of the common currency, remains at the center of the conflict among among member states and could eventually lead to an end of the euro. Elections in France, Germany, and Italy must be closely watched as the three countries make up 65% of the entire Eurozone economy. Indeed, the results of these elections will dictate the future of the EU.

France – Frexit is unlikely even with Marine Le Pen’s victory. Uncertainty in the upcoming election in France on April 23rd, and May 7th have been causing a ruckus in the financial markets. Particularly, the gap between yields of 10-year French government bond and German bund reached a record high in the past 4 years on the day that Marine Le Pen, leader of the far-right National Front, reiterated her plan to pull France out of the EU (Figure 1). Nonetheless, latest polls by the Financial Times as of April 3rd suggest that Le Pen has a high probability of entering the second round of election but stands little chance of winning the final round to become the next president. She will likely lose out to Emmanuel Macron, a former minister turned independent presidential candidate. Besides, even in the case of Le Pen’s becoming the next French president, it will be difficult to hold an exit referendum because such a move would have to go through parliament process. A survey by Ifop in July 2016 also shows that more than 67% of the French public will choose to stay in the EU.

Germany – Anti-refugee rallies pose a challenge for Angela Merkel in her bid for the fourth term as chancellor. Angela Merkel, the current German chancellor, will face a tougher competition than before, as she struggles to lead her country through the European economic crisis and rising popularity of extreme-right politics. Also, her approval rate has suffered from brewing anti-refugee sentiments. So far, campaigns on refugee restriction have won the Alternative for Germany (AfD) local elections in some regions. However, nationalwide popularity of the AfD remains limited. The key rival to Merkel is, in fact, Martin Schultz, the former EU Parliament President and the leader of Germany's Social Democrats (SPD) party. His pro-EU stance means the case of Germany leaving the EU is not an immediate concern right now.

Italy – The rise of Five Star Movement (M5S), a far-right political party, could mean Italexit. Since Matteo Renzi, the former Prime Minister of Italy, resigned after having lost in a referendum to reform the parliament in late 2016, the Eurosceptic M5S has been gaining popularity among Italian voters. At the same time, Italians’ support for the euro has been on a steady decline, down to 41% at present, according to Eurobarometer. Anti-EU sentiment in Italy has been on the rise partly due to its chronic economic problems especially in the banking sector, where NPL level is as high as 18%. Italy is one of the European countries that have suffered from the introduction of the common currency and the regulations set by the EU. For example, using the common currency that is tied to a stronger economy like Germany, the weak Italian economy could not rely on exports to speed up recovery because the euro remained too strong. Moreover, the Italian government cannot bailout its troubled banks due to restrictive EU rules. The rules mandate that equity shareholders and debt holders of a failing bank must take at least 8% loss of total liabilities before the government can bail in. However, doing so could lead to big financial losses among the Italian public. For now, the issue has been partly alleviated, yet many voters have expressed frustration towards the government and called for an exit from the EU.

What will happen if EU members leave the euro?

In the worst-case scenario, the far right's victory may lead to a disintegration of the European Union and eventually the common currency. The desire to pull out of the EU and the common currency has been gaining steam in different countries, supported by political parties such as the National Front, the Alternative for Germany, the Five Star Movement, and the Party for Freedom (the Netherlands). All argue that a return to a national currency would once again give each country control over monetary policy, leading to more country-specific policy development for better long-term prospects. A weak currency, for weaker economies, will prove beneficial for the export sector, while cutting down import and boosting foreign exchange reserves. This could become key in solving many of the economic issues facing some European countries. In addition, leaving the EU would, of course, allow countries to break from the EU's requirement for a free flow of people, a long-standing point of dispute. The issue of refugees, for example, has time and again been a major talking point among far-right politicians.

However, the end of the Euro may have a severe impact on the economy. Investors may not have confidence in the new currency amid political uncertainty after the exit from Eurozone. The new currency may, therefore, experience massive depreciation. If France were to leave the EU, for example, government bond worth more than EUR 2 trillion would have to be converted into the franc, while the falling franc might induce a massive bond sell-off, pushing bond yields up. With high bond yields and a weak currency, borrowing costs would rise, dampening economic recovery prospects. For Greece, already in the throes of a public debt crisis, a return to the drachma would result in higher debt as the majority of Greek debts are in the Euro. A weak drachma would push up Greece's debt burden, resulting potentially in continuing defaults. As for Italy, problems stemming from bad debt in the banking sector would exacerbate due to a weaker currency, driving up recapitalization costs and potentially leading to an economic crisis. A currency switch would, in addition, lead to higher prices of imported goods, affecting the cost of living and economic growth. And if the government were not careful about printing new bank notes, hyperinflation might follow, as happened in Russia in 1992. Even if only one country decided to forgo the use of the Euro, consequences may be wide-ranging as all countries in the Eurozone are closely linked economically.

Figure 1: Uncertainty of the French election has caused panic among investors 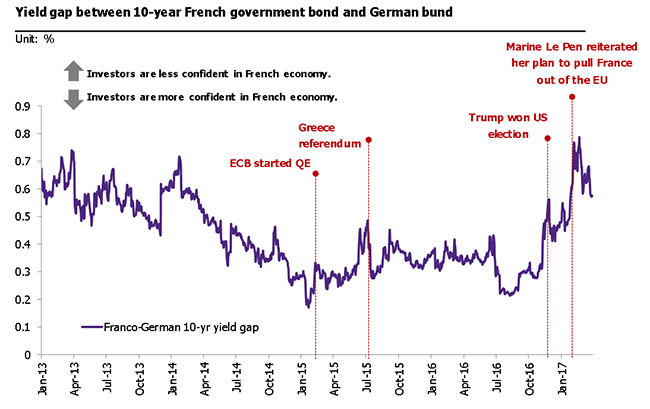 Figure 2: Computer and parts and auto and parts are Thailand’s major exports to EU

Note_EN_EU-disintegration_20170404.pdf 498.12 KB
Tags
ThailandEUKey Political event
We use cookies and other similar technologies on our website to enhance your browsing experience. For more information, please visit our Cookies Notice.
Accept