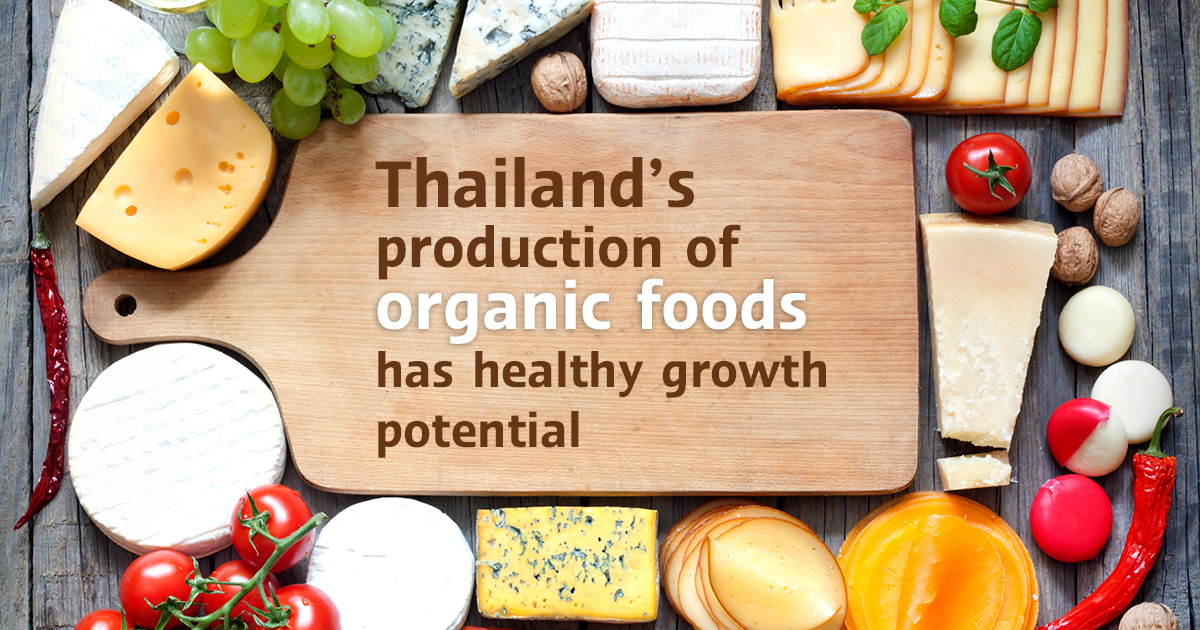 As Thailand considers how to help its agricultural sector produce better livelihoods for farmers and opportunities for businesses, organic food deserves serious attention. The world’s appetite for organically grown foods has become too big to be ignored, worth some $80 billion in 2014, according to the Research Institute of Organic Agriculture (FiBL). The biggest markets are Europe and the U.S.

Sales of organic foods are growing by double-digit rates in many countries. The fastest growth is reported in China, up 32% per year from 2010 through 2014, driven in part by frequent scandals over food contaminated by chemicals. In Thailand, sales of organic food grew at a 7% annual rate during that time, well above the 5% growth rate of conventional foods, according to Green Net Cooperative, a Thai non-profit group.  The main foods grown organically here are rice, coffee beans, mulberry leaf tea, fresh vegetables like lettuce, and fruits like coconut.

Premium pricing is a strong incentive for producers. Consumers are willing to pay 15% to 50% more for organics.  This stands in sharp contrast to the sinking prices of many of Thailand’s commodity farm products like corn, tapioca and soybeans. Prices paid for rice, the nation’s most important crop, have recently fallen to ten-year lows.  Some 60% of Thailand’s 13 million farmers grow rice, and their incomes have been battered.

Chemical-free agriculture sidesteps the challenging price volatility of crops traded on global markets. Yet organic farming remains a tiny niche industry in Thailand. Just 0.3% of the nation’s agricultural land is certified as organic, compared to 1% worldwide, according to Organic Agriculture Development Thailand and Earth Net Foundation. Less than 0.2% of Thailand’s farmers practice organic agriculture. Remarkably, 58% of the organic food sold at retail here is imported.

Why isn’t more organic food produced in Thailand? The market’s barriers to entry are high, for growers and businesses alike.  Farmers who want to avoid the health hazards of handling synthetic pesticides will discover that not every plot of available land can be converted to organic. To qualify for certification, a field must be irrigated with water that tests free of pollutants. This requirement excludes most land situated near factories. Even land next to a large road can be disqualified because of airborne pollution.

Farmers are also hindered by de-facto “startup” costs, because their incomes decline during the years needed to convert fields to chemical-free cropping.  The time required is between 1 to 1.5 years for domestic sales and 2 to 3 years for exports. During this interim, the growers cannot yet earn those higher prices because their products are still not certifiable. Yet they have to cope with the reduced crop yields associated with organic farming. Compared to conventional agriculture, natural methods yield 13% to 61% less per hectare, depending on the type of crop.

Organic farming takes more sweat and toil. Going chemical-free means removing weeds manually and producing one’s own organic fertilizer. Without chemicals, farmers have to abandon monocropping, the practice of growing a single crop year after year on the same land. Instead they need to adopt polycropping, rotating crops so as to improve soil quality and reduce pests. This takes more effort and reduces economies of scale.

Small scale also affects wholesalers and retailers in sourcing and selling these goods. Instead of one big crop in bulk, they handle smaller quantities of many different organic foods.  Lower volumes increase the relative costs of transportation, processing, distribution and marketing.

Certification schemes challenge exporters because there is no universal system for organics. The U.S. Japan and E.U. each has a different standard. Thus, to export a single product to several markets, a farmer has to shoulder the cost of getting multiple certifications. The future may bring multilateral or harmonized international standards, such as the ASEAN Standard for Organic Agriculture (ASOA). This will eventually foster greater trade of organic products among member countries, but for now, certification is a hurdle.

Meanwhile international competition is growing. One of Thailand’s main rivals in the rice export market, Vietnam, is moving ahead on organic food.  Vietnam already exports significant quantities of organic tea, and now its Ministry of Industry and Trade is targeting organic rice. Vietnam has slightly more organic farmland than Thailand does today.

The Thai government, for its part, wants to pick up the modest pace of growth in the nation’s organic food production. The Ministry of Agriculture and Cooperatives intends to make Thailand the organics leader of Southeast Asia, aiming to increase both organic farming land area and organics revenues by 20% annually for the next five years.  To do so, officials are working to build awareness, help create value-added products, and expand overseas markets. The Ministry’s Department of Agriculture laid some important groundwork for chemical-free farming starting in 2002, when it created a national standard, Organic Thailand, which provides certification at no cost to Thai farmers. This helps growers who focus on selling their products domestically.

The nation’s consumption of organic food remains low, with retail sales of just $0.24 per capita in 2014, compared to $10 in Japan, the highest level in Asia, and $294 in Switzerland, the world’s top level, according to FiBL. As Thailand’s population ages and as incomes rise, domestic consumption of organic foods is likely to grow.  The market could also gain momentum from ongoing expansion of tourism-related businesses like premium restaurants, spas and resorts.

Exports should also grow. Thailand is a world leader in farm products, which comprise more than a sixth of the nation’s exports. And Thailand is a net exporter of food, with a strong national “brand” in this category.  This favorable positioning should help sellers of exportable organic products like rice, premium fruit, coffee and tea.

Growth in demand will sooner or later prompt more farmers and businesses to surmount the obstacles and expand their sales of organic foods. This will help the nation’s agricultural sector diversify its offerings and increase value-added. Chemical-free foods and farming thus deserve a prominent position in the national agenda as Thailand works toward adopting healthier approaches to economic growth.