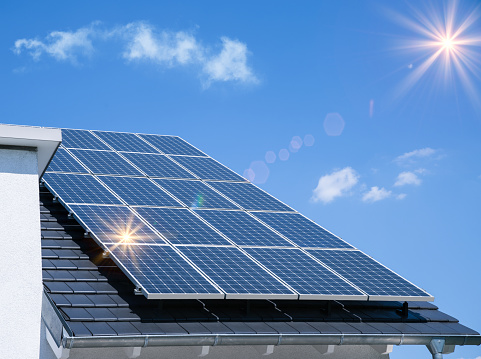 The shifting solar support policy and declining installation costs have increased opportunity in solar installation business. Previously the government's support measures mainly targeted investments in large-scale solar farms, where each farm can generate enough electricity for 800 homes. Its focus is now on investments in residential rooftop solar system that can power for use in individual homes to provide the long-term energy saving. Solar technology cost has dropped dramatically as well. It has driven down the installation cost of solar PV system as much as 50 percent in recent years. EIC thinks the shift in policy couple with fallen prices have made solar installation business more interesting than in the past.

Despite the lower cost of system installation, the upfront cost is still too high for homeowners to go solar. It is the primary challenge in the residential-scale market. Solar installer may consider implementing successful business models from international market in Thai context. Though the cost of rooftop systems is expected to become 30-40% cheaper in the next 3-5 years, still, the initial investment is considerable, potentially costing more than THB 200,000 on the typical home. Moreover, financing can also be complicated, particularly if homeowners borrow from a different bank than their mortgage and monthly installment could be costly. For these reasons, many homeowners are staying put.

This issue is not unique to Thailand. In other markets, the business model called 'third party financing' has been developed to unlock the residential rooftop market. In the US, for example, SolarCity, a system installation company, offers rooftop solar installation and maintenance service with different monthly payments options for homeowners, including loan, lease, or sell the discounted electric rates to hosts.  These models help expand the size of the market significantly. Currently, residential rooftop solar power accounts for approximately 20% of all solar power generation capacity in the US. This business model has the potential to apply in Thailand, too, but may require some adjustments for the Thai electric-related business context.

Alternatively, the solar installers may target homebuyers by joining hands with real estate developers to expand their customer base. Because companies providing installation service can approach numerous clients at one time, the installers can sort the system equipment at the lower cost due to economy of scale. Additionally, homeowners can pay both for the rooftop solar system and the house in installments through a long-term mortgage. Last but not least, differentiation of the installers by offering services that fulfill the needs of both homebuyers and real estate developers such as a system warranty, maintenance service, and mobile application that allow effective monitoring etc.

Though the price of a new home with rooftop system will rise, the solar installers should highlight the increasing value of the house to real estate developer to build up the selling point of the property development. For homebuyers, location, size, and price remain key factors. Using solar rooftop as a market differentiation tool, the property developer will have to convince homebuyers that a rooftop solar system is worth the cost. In addition to helping to cut electric bills or central maintenance fees, the rooftop system can push the home appraisal price up. According to a study in major American rooftop solar markets the estimated price of a house with the rooftop solar system is 3% higher than a comparable one without the system. Moreover, it tends to sell faster than those without in the secondary housing market. Although used solar home market is not widely known yet, the trend potentially happens in Thailand as well. 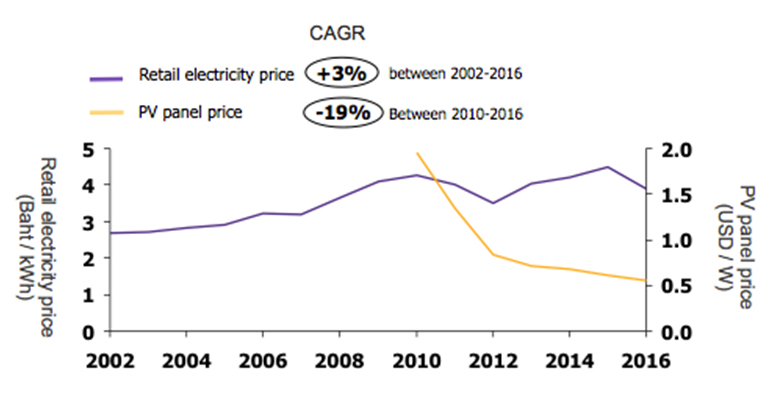 Source: EIC analysis based on data from EPPO, DEDE, ERC, and Bloomberg

Figure 2: Cheaper solar panels reduce system cost overall, which has been falling continuously at the rate of 25% per year.

Source: EIC analysis based on data from IEA-PVPS 2015

Figure 3: From 2007 to 2013, number of houses with rooftop solar panels in California grew by 58% per year after private companies started offering third-party financing.

Source: EIC analysis based on data from http://gosolarcalifornia.ca.gov.