Energy industry - resurgence or recession in the Trump era?

Donald Trump’s victory in the US presidential race portends significant changes in the energy industry. His platform supports fossil fuel businesses, aiming for the US energy-independence. However, Trump’s plan to deregulate environmental controls on the industry while downgrading renewable energy will pose risks for renewable energy businesses. A Trump presidency has sparked a bright outlook for the oil industry. His energy policy will push for more investment and employment in the US oil industry, aiming for US energy-independence. Trump’s plans to increase investment in oil businesses include opening up more federal lands for oil drilling in the Gulf of Mexico and the Arctic, both onshore and offshore. The US currently has the world’s largest untapped oil and natural gas resources, worth about 50 trillion US dollars. President-elect Trump also plans to shorten the approval process for drilling permits on federal lands, which currently can take up to 300 days. The long process has pushed oil producers to look to private or state lands for leasing because of much shorter processing times, as short as 2-4 days in Texas. Trump has also promised energy tax reform, including permission for oil and gas businesses to use intangible drilling costs (IDCs) as a tax deduction. These policies will induce more investment in oil exploration and production businesses, decrease costs for the industry, and create about 500 thousand jobs. This makes it likely that the US will produce more crude oil and become a net oil exporter by 2023, five years earlier than previously expected.

Tight oil and shale gas production in the US will likely increase when oil prices rise, leading to higher supply of oil and natural gas. The US has abundant tight oil and shale gas resources, but they are about 1.5-3 kilometers under the earth’s crust and thus require more expensive drilling technology called hydraulic fracturing or fracking. Currently this method of extraction faces much resistance since it contaminates underground water and possibly drinking water supplies. However, in line with his America-first energy plan, Trump will move ahead with pro-fracking policies. EIC sees tight oil and shale gas production remaining steady until crude oil prices exceed 55 US dollars per barrel, the average break-even price for most oil producers.

Reviving energy infrastructure projects like oil pipelines will help secure oil supplies for refinery businesses in the US. Trump plans to increase private investment and create jobs by speeding up energy infrastructure projects like the Keystone XL pipeline. The project, stretching 1,900 kilometers from Alberta, Canada to Nebraska, USA, was stalled during the Obama administration by environmental concerns that producing and refining Canadian sand oil will emit more carbon dioxide than any other crude oil. In the Trump administration we will likely see a speedy resuscitation of the project. The Keystone XL pipeline will transport oil from Canada to an existing pipeline network, supplying oil refineries concentrated in the Midwest and the Gulf of Mexico and thus reducing American refineries’ dependency on politically-sensitive crude oil from the Middle East. The pipeline is expected to increase US GDP by around 3 billion US dollars and create 9,000 more jobs.

Oil prices will soar if Trump decides to scrap the Iran Nuclear Deal. After the P5+1 (the US, the UK, China, France, Germany, and Russia) lifted sanctions on Iran’s oil industry in 2015, Iran, the third-largest oil producer in the OPEC, has been ramping up oil production to regain its former pre-sanction market share of 4 million barrels per day. With the possibility that Trump might reconsider the deal, EIC expects that Iran will further ramp up production and will not join the OPEC in cutting output to stabilize oil prices. If eventually Trump decides to use the President’s executive authority to reverse the deal, oil prices will shoot up in the short term due to geopolitical risks and the supply of about 1 million barrels of oil per day will be tightened since Iran will not be able to export to certain markets.

Meanwhile, the renewable energy industry could face slower growth as Trump may roll back support for renewable investment, possibly resulting in higher renewable energy production costs in the US and troubling exporters of renewable energy products. Trump, a climate change skeptic, has attacked solar and wind power for their expensive production costs, and has pledged to repeal the Obama administration’s Clean Power Plan designed to limit carbon emissions from power plants. However, policies that have already passed Congress and enjoy bi-partisan support, such as the Production Tax Credit (PTC) which provides 23 US dollars per megawatt-hour to the wind industry and the 30% Investment Tax Credit (ITC) for solar projects, will likely remain in place. With these tax credits renewable investments have grown by leaps and bounds. Installations of solar panels grew 76% annually since 30% tax credits were provided in 2006.

These changes will raise costs for renewable businesses in the US once PTC and ITC policies expire in 2019 and 2023 respectively. In addition, Asian manufacturers, especially China, the main exporter of solar panels and inverters used in solar-powered systems, may be less able to compete if Trump decides to raise import tariffs to 30-45% from the current 5-11%. It is estimated that in the next 4-8 years the growth of electricity produced by renewable sources like solar and wind power will slow down to around an average of 2% from previously growth of 24%.

EIC expects oil prices to continue to be suppressed by an escalating American oil supply in the short term. In the medium term, oil prices will likely rise following the recovery of oil demand and the global economy. A short-term upward adjustment for oil prices will be capped by an overflowing oil supply driven by Trump’s pro-drilling stance. However, if Trump decides to sanction Iran, then oil prices would rise. In the medium term, EIC expects oil prices to gradually improve as demand catches up to supply. Trump’s economic stimulus plan, tax cuts, pro-business policies, environmental deregulation, and spending on infrastructure like roads and airports will help lift demand for oil. EIC expects 2017 oil prices to average around 52 US dollars per barrel. 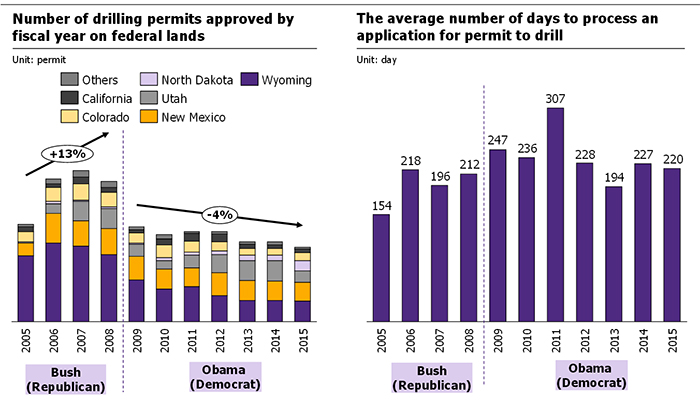 Source: EIC analysis based on data from the US Bureau of Land Management

Figure 2: Electricity generation from solar and wind sources will likely stall due to decreased support from Trump. 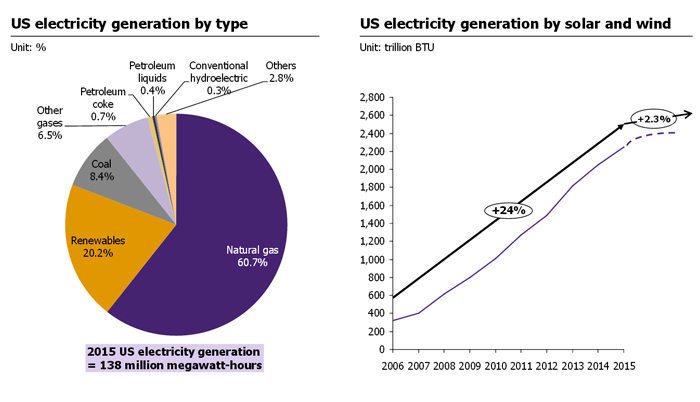 Source: EIC analysis based on data from the US Energy Information Agency

Figure 3: Oil prices will likely remain stable in the short term, suppressed by an increased supply from more drilling in US. In the medium term, oil prices will gradually lift as oil demand rises following economic recovery. 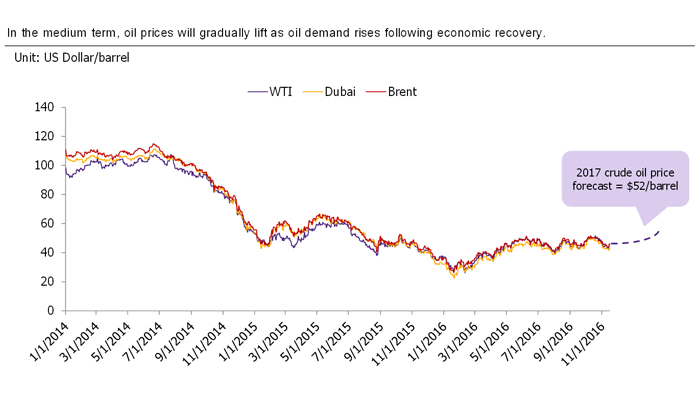 Note_EN_Trump-impact-energy_20161124.pdf 442.37 KB
Tags
ThailandUSDonald TrumpOil &amp; GasPetrochemical
We use cookies and other similar technologies on our website to enhance your browsing experience. For more information, please visit our Cookies Notice.
Accept